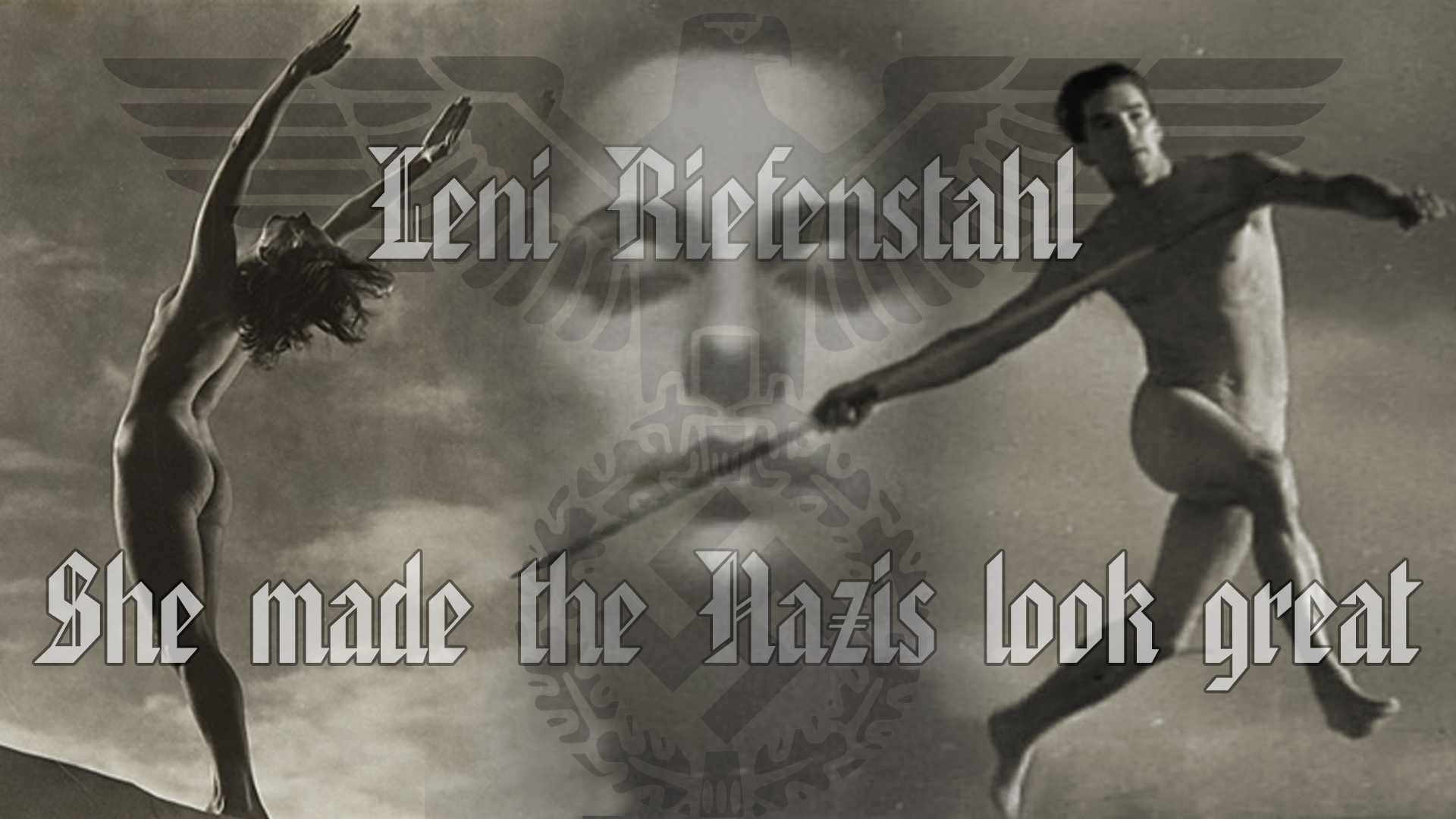 “How Hollywood Helped Hitler” In our latest Between 2 Wars episode we explain the use of film in Nazi propaganda. As part of that explanation, you can’t ignore Leni Riefenstahl – the most infamous and without a doubt most effective Nazi propaganda filmmaker. As we note in the video Riefenstahl’s work was in many ways revolutionary and continues to influence filmmaking to this day. As some of you wanted to understand how and some doubted her legacy as Nazi propaganda, I wanted to explain this a bit. For those of you that are not familiar with Ms. Riefenstahl you can get the basics on her wikipedia page.

As anyone who knows my writing will have noticed, I’m not prone to flippantly perpetuating Nazi myths… but Riefenstahl’s legacy isn’t a Nazi myth. She truly did change cinematography and filmmaking, with films like Star Wars, Apocalypse Now and Schidler’s List having admitted influences from her work, to just name a few.

Riefenstahl had already developed the beginning of her style and many of her ideas before the Nazis came to power. However, in Triumph Des Willens (1934) and Olympia I and II (1936) covering the 1936 Olympics in Berlin her work came to full fruition, largely thanks to Goebbels opening up the Nazi party coffers to give her unlimited budgets. In any case, she started developing some revolutionary ideas already in the late 1920s when working together with Dr. Arnold Fanck on his Bergfilme (mountain films). Some of these innovations seem pedestrian to us today, but were unheard of at the time. Although  many of the things she developed had certainly tried by others like Fritz Lang, F. W. Murnau, or in experimental movies, she would take them to new levels

Things like extreme close ups inserted into a ‘normal’ narrative, cutting in cross motion to the camera movement, using actors and extras to pass into the camera to create a ‘in shot’ cut, or extreme dutch angles had already been tried. In Riefenstahl’s hands they were made to look mainstream and narrative-friendly in an extraordinarily banal way. More importantly she came up with three things that were completely new.

The first one was using inanimate objects and nature as if they were characters in her script. This is perhaps best exemplified by a scene in Das Blaue Licht (1932) where she drove Fanck nuts by actually pulling off a transport scene that she had written into the script where the fog was to dance poetically over the rocks. Fanck had told her that she could never do that on purpose, according to his logic these things only happen by chance, if you’re lucky. But Riefenstahl had worked it out; by using a subtle dolly movement towards and along a cliff ridge in light fog, shot in the sunrise against the light, it was exactly what she had written.

Her iconographic aesthetics for inanimate objects came to full fruition in Triumph and the Olympia films where she used the Nuremberg Party Field, the Berlin Stadium, Archaia Olympia in Greece and others settings to not only set the stage but as ‘characters playing against the actors’. In short she went from set design as a backdrop to letting the setting be an integral part of the story telling. Now, Lang and others were doing similar things in for instance Dr. Mabuse, but only as subjective perception, still putting the live characters at the centre. Riefenstahl takes that to new levels. In our clip you can see this in the shots of Hitler cut away against the architectural structures. Or in this screen capture, where the microphones and the dais take centre stage with only secondary emphasis on Hitler, which creates anticipation and places us not in Hitler’s perspective but that of the dais he stands on:

Another example I chose for the film are the waving ‘flags on flags’ – where according to historian Tom Saunders;  “The effect is a significant double transformation: the images mechanize human beings and breathe life into flags.”  It is also especially well employed in the SS troops marching down the stairs that we showed. This is shot, not in ‘normal human subjective angle on a tripod,’ but from the subjective angle of the stairs, creating a feeling that instead of just walking on stairs they are being led down and forward by the stairs and closer to the dais raising Hitler above them. Consider the symbolism and shiver!

The second thing she did was to mix up newsreel style footage with cinematic effects to create pathos and emotion. I chose one example of this in the video segment of Triumph, where we cut from Hitler to the young boy, and back to Hitler as if they were reacting to each other. Then when we get shown this connected to very traditional, static newsreel-like footage of the crowds we are left with a ‘documentary’ feeling, but one that takes us into the filmmaker’s deep subjective understanding of the event. It is in many ways the essence of turning factual footage into emotional propaganda. While this is completely mainstream in modern TV production today in 2019, it was unheard of in documentary material before Riefenstahl.

Third of all she developed completely novel technical solutions using Goebbels open coffers for Triumph and the Olympia films. While documentary or event filmmaking had been a very static affair until Riefenstahl, she now inserted and expanded on technical solutions for moving cameras and equipment setups previously only tried for fictional filmmaking to cover a non-scripted event.

She developed new dolly solutions, camera elevators, new cranes, zip line cameras, balloon cameras, sequential panning camera lines, and much more stuff that is today the pillar of covering sports, concerts, and other live events. I chose one shot to exemplify this in the section in the video – the rising shot over the Nuremberg Party Filed, which was at the time the highest pan up/tilt down crane shot ever made (it wasn’t a crane though – she specially constructed an elevator construction to raise a camera along one of the pillars of the stage section). By these measures the action is brought closer to the camera and the event goes from an objective static witnessing to a subjective integrative experience.

So… despite the frightening use she put her talent to, Leni Riefenstahl most certainly changed the way films were made – and yes, perhaps some of it had already been done, most probably someone else would have done it sooner or later, but she was the one that took all of this to a new level and put it together for the first time. In many ways she gave birth to what we today know as ‘standard’ event-filmmaking and videography.

Techniques and ideas which in turn were quickly transported back into fictional filmmaking where she had originally started developing them. For an example of how quickly this took on, I recommend Citizen Kane (1941) by Orson Wells, another ‘fallen genius’ (for more benign reasons) of the same era, and another trailblazing film that took on some of Riefenstahl’s ideas, in fact reversing them, mixing it up the other way around by using the newsreel style for fiction. If you compare Citizen Kane, made only a few years later, to any work made before Triumph and Olympia you will see a huge difference.

Finally it’s worth noting that Riefenstahl’s final work for the Nazis was to document the invasion of Poland against Goebbels wishes, who feared that she could not stomach the true brutality of the Nazi war machine – he was right and she returned to Germany shaken and broken by the ruthless murders of PoWs and civilians that she witnessed on the front. One would expect that to be enough to repent and apologise for her service to the Nazi cause after the war, but despite even knowingly using concentration camp inmates as cheap team labor and extras, Ms. Riefenstahl would refuse to admit any fault until her death at 101 in 2003.