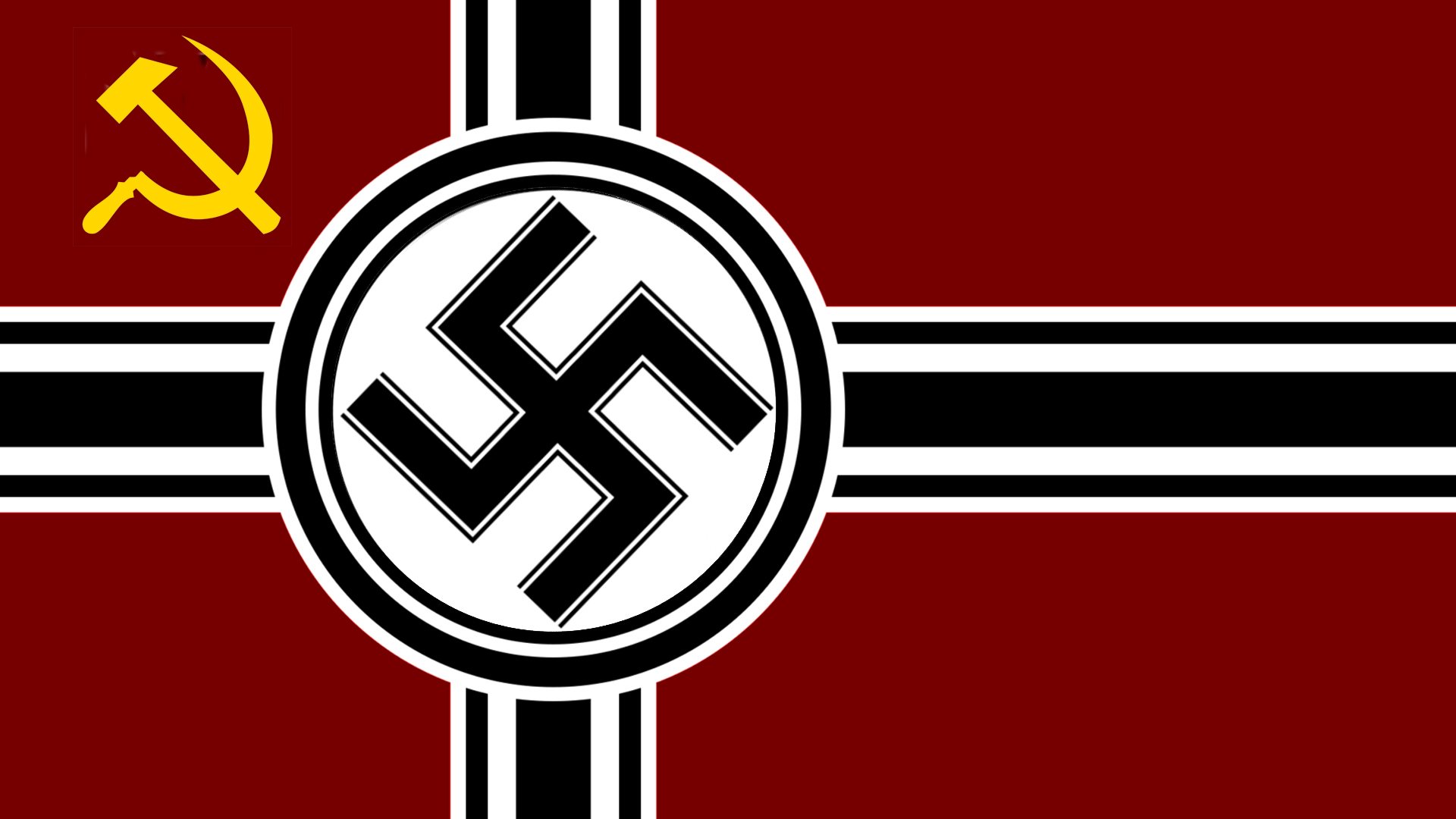 The choice of the Deutsche Arbeiterpartei (German Worker’s Party) to incorporate ‘Worker’s’ and then changing name to the Nationalsozialistische Deutsche Arbeiterpartei (German National Socialist Worker’s Party), NSDAP for short, has created controversy in the classification into a left/right political position of Naziism. Lately it has become an issue of some virulent public debate as populism resurges and supporters of populist ideas on both ends of the political spectrum try to distance themselves from the radical movements of the 20th century. Socialism and Communism are easy to pin to the extreme left, and Fascism and Naziism is usually classified as radical, extreme right-wing movements, but is Naziism a left-wing moment after all? 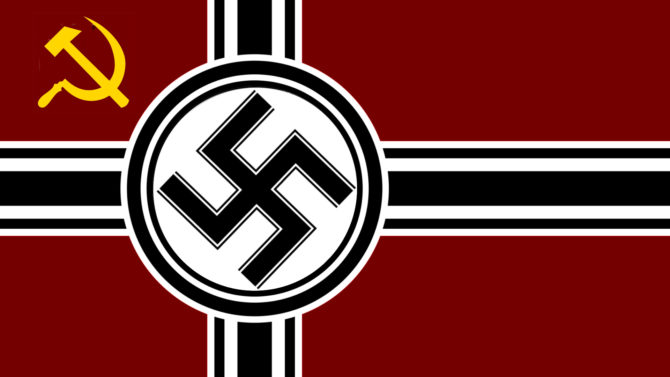 In fact, the Nazis viewed themselves as above right/left-wing definition, but sympathised more with the right in action although not in words. The reason that others than the Nazis themselves usually classify them as right-wing are the social politics of the NSDAP being on the extreme end of reactionary politics. Reactionary politics tries to conserve, or even restore the status quo, while progressive movements drive for a new order. This gets confusing with the Nazis, because clearly they were driving for a new order and yet this order was based on the idea of a return to a mythical better past. To confuse things even more, the Nazis saw themselves as revolutionaries and opponents of reactionary politics, viewing themselves as radical progressives.

To get things even more confused, although the extreme left also claimed to be against the old autocratic systems of imperialism, feudalism and monarchism – the Bolsheviks managed to create a system that was in fact strictly autocratic and hierarchical in nature. The Russian Communits spoke of liberal values like equality and tolerance, but Soviet society was everything but equal or tolerant. To boot the internationalism of the Russian Soviet progressed more and more into what looked very much like a Russian patriotic federal state. By WWII they had even abandoned the semblance of not being patriotic. But that’s another story that we will cover separately, so let’s get back to the Nazis…

In February 1920 when they added National Socialist to the party name, they were most definitely not thinking of Socialism in the way it is usually described. The reason they added the word ‘Socialist’ and already had ‘Worker’s’ in the party name was to become attractive to conservative, nationalist but disenfranchised working class men that were ready for violent action, but had joined the extreme left for lack of an alternative. Although the record is unclear here, it seems that Hitler was not happy about the addition of ‘Socialist’ and felt that ‘Worker’s’ would have been enough. Had this prevailed the party name would have been “Nationalist German Worker’s Party”. Note that ‘Worker’s’ does not imply labour action friendly – it was a way to disassociate themselves from the reactionary nobility and upper classes that they felt had betrayed Germany and where responsible for an “unnecessary 1918 armistice.” In other words: ‘worker’ as in ‘of the ordinary people’ as opposed to ‘of the elite’. They were staunchly opposed to unionism and labour action, instead they believed that it was the role of the party to take care of all members of “the race” independent of their class. So far when you look at it, it’s a party trying to not be labeled right wing, but clearly being on that end of the spectrum.

It’s when we get to fiscal policy that it gets truly confusing – the Nazi economic agenda defies classification in left or right as it contains aspects of both and aspects that are… well frankly incomprehensible for any serious economist. Many historians have argued the this has a lot to do with Hitler’s poor understanding of macroeconomics. Or as our colleague Ian Kershaw puts it:

“[Hitler] was wholly ignorant of any formal understanding of the principles of economics. For him, as he stated to the industrialists, economics was of secondary importance, entirely subordinated to politics. His crude social-Darwinism dictated his approach to the economy, as it did his entire political “world-view.” Since struggle among nations would be decisive for future survival, Germany’s economy had to be subordinated to the preparation, then carrying out, of this struggle. This meant that liberal ideas of economic competition had to be replaced by the subjection of the economy to the dictates of the national interest. Similarly, any “socialist” ideas in the Nazi programme had to follow the same dictates. Hitler was never a socialist. But although he upheld private property, individual entrepreneurship, and economic competition, and disapproved of trade unions and workers’ interference in the freedom of owners and managers to run their concerns, the state, not the market, would determine the shape of economic development. Capitalism was, therefore, left in place. But in operation it was turned into an adjunct of the state.”

In other words, the NSDAP fiscal policies were driven by the racist and social conservative agenda, and preparing for war. Economic action by the party was almost exclusively a means to enable conquest to create Greater Germany. The introduction of welfare programs for the “German race” has often been presented as evidence the Nazis were leftist. This argument ignores the fact that creating a welfare state in Germany was universal policy both on the right and left. The strictly conservative, to not say reactionary first government of Germany under Chancellor Bismarck had set this ball in rolling as they attempted to suppress the budding Socialist movements by proactively addressing the basic needs of the working classes. By the 1920s it would have been political suicide to oppose the idea of insurance based compensation for the people. The Nazis, rather than being progressive on this front reduced the coverage of welfare by restricting it to the  “German race”.  They benefitted in public opinion when the growing economy of the 30s enabled them to reinstate insurances after the welfare programs of the Weimar republic had fallen apart during hyperinflation and the economic collapse of 1929. This in turn led to the misconception that Hitler gave the workers of Germany social benefits, which they had at least theoretically always had.

On a side note as we mention economic growth; there is and has been been much talk of how Hitler saved Germany financially – this is a myth that that is not supported by the economic data. Germany (as most of the rest of the world) was already recuperating in 1932/33 and the economy was growing. Basically Hitler took over a machine that had just started running again, but he didn’t keep it running as good as it could have. When Hitler seized power, Germany was actually slightly above the growth level of the rest of the western world, but during the rest of the 1930s Germany grew substantially below most other industrial countries in Europe. One catastrophic financial decision after the other by the Führer was fixed in the last minute by folks like Albert Speer, acting more or less contrary to Hitler’s ideas. But that’s yet another story we will cover separately further down the road.

So it looks like the Nazi party was both left and right in its foundation and this is supported by the events. During the 1920s until 1934, the party had a strong outspoken left-wing phalanx led by amongst other Ernst Röhm, Hitler’s only close personal friend and the leader of the paramilitary forces of the party; the Sturmabteilung or SA. The SA had been instrumental in getting the NSDAP to power by implementing street violence against the opponents of the party and organising violent, terrorist attacks on German society.

When the party had seized power and Hitler was dictator these actions were no longer needed to uphold power. Röhm saw it differently and wanted to proceed with the implementation of his more radical leftist views. His aims was a “Second Revolution” that would eliminate capitalism (which they associated with Jews), and pushed for nationalisation of industry, expansion of worker control, confiscation and redistribution of property and estates, and social equality. Clearly close to a traditionally Communist agenda that was much more radical than anything Hitler wanted. As 1933 progressed the rift between the two deepened and by early 1934 rumours of a coup by Röhm against Hitler were in circulation. To be clear: Hitler and the rest of the NSDAP leadership were strictly opposed to the radical ideas that Röhm and the SA were trying to implement. In a well documented agreement with German business leaders and then still President Hindenburg they turned on their own members and used the military to crush the SA and arrest its leaders during a purge that started on June 30 1933 with the “Night of the Long Knives.” Rhöm was arrested and on July 1st he was murdered on Hitler’s orders in his cell at Stadelheim Prison. That was the definite end of any Socialist part of Nazi development and from then on Hitler and his cohorts never revisited the idea of a Socialist style second revolution, instead they cooperated closely with German business and the capital elite to put the country on war footing and introduce extreme conservative policies.

So where does that put us? Where they left, or right? Also… does it matter? Perhaps the attempt to classify Naziism is more confusing than helpful, or as the article in Encyclopaedia Brittanica succinctly puts it “Nazism attempted to reconcile conservative, nationalist ideology with a socially radical doctrine. In so doing, it became a profoundly revolutionary movement—albeit a largely negative one.”