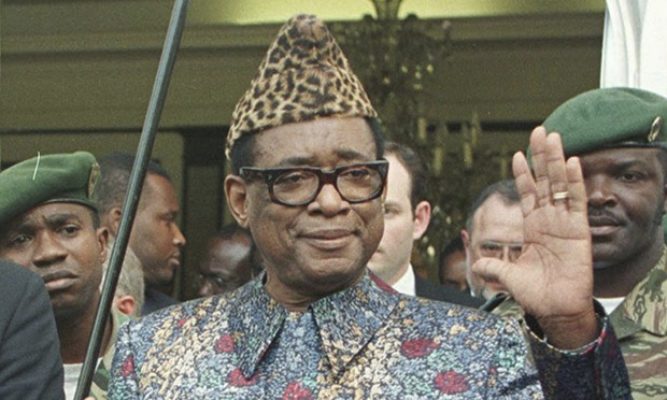 Zaire’s president Mobutu Sese Seko, who ruled the country 1965-1997, was one authoritarian leader who never forgot his roots.

In fact, he built an enormous palace 1,000 km away from Kinshasa, his capital, deep in the rainforests of the Congo by the village where his family came from, Gbadolite. This is one of the least accessible areas in Africa, yet he spent 100 million dollars building his palace, which required maintenance to the tune of 15 million dollars a month. The complex featured swimming pools, a gold topped fence, and a five star “motel”.

An international airport was even built so he, his family, and his mistresses could fly right in. The airstrip was long enough for the Concorde to land there, which it did- chartered from Air France.

Did I say “an enormous palace”?
Well, he actually built TWO of them there in the jungle, one for state affairs and one a private residence.

And of course he also built a village of Chinese pagodas, everything done up in marble, with chandeliers and antique furniture everywhere, and an endless supply of pink champagne, his drink of choice. Pope John Paul II, Francois Mitterand, and Boutros Boutros Ghali are just a few of the many celebrities that visited Mobutu’s Zaire Xanadu. And yet, though his reign and his life ended less than a quarter of a century ago, much of his works- just like those of Ozymandias- now lie in ruins.