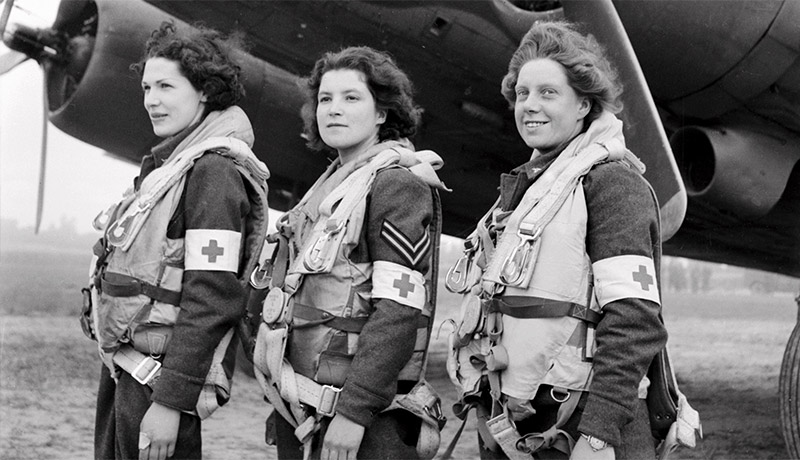 A few days ago was International Nurses Day, fittingly placed on the birthday of Florence Nightingale, England’s ‘nurse of nurses’. Nightingale managed and trained nurses during the Crimean War, opened the first secular nursing school in the world, and is considered the founder of modern and professional nursing. In honor of this, today’s post is all about:

4. The Flying Nightingales – British WW2 nursing orderlies with special training who evacuated over 100,000 wounded from Normandy after D-Day on RAF transporters, one orderly on each plane. Later they also brought back released POWs and liberated concentration camp prisoners in need of medical attention.

3. Dasha Sevastopolskaya – As a teenage orphan in Sevastopol with no medical training, she sold everything she owned and set up the first Russian nursing station during the Crimean War on her own. She dispensed food and water, and used vinegar and pieces of her clothing for disinfecting and dressing wounds, all at her own expense.

2. Josephine Nesbit – WW2 US Army nurse stationed in the Philippines. Worked an 18 ward, 6000 patient outdoor jungle hospital and an underground hospital in extremely harsh conditions. When captured, she ran the Manila Internment Camp hospital for 2,5 years under even worse circumstances until liberated. Retired from the army a major.

1. Mabel Keaton Staupers – US African American pioneer and advocate for racial equality in the nursing profession. She was instrumental in the desegregation of the Armed Forces Nursing Corps during WW2, and kept fighting for full inclusion of nurses of all races in the U.S. military- which was granted in January 1945.