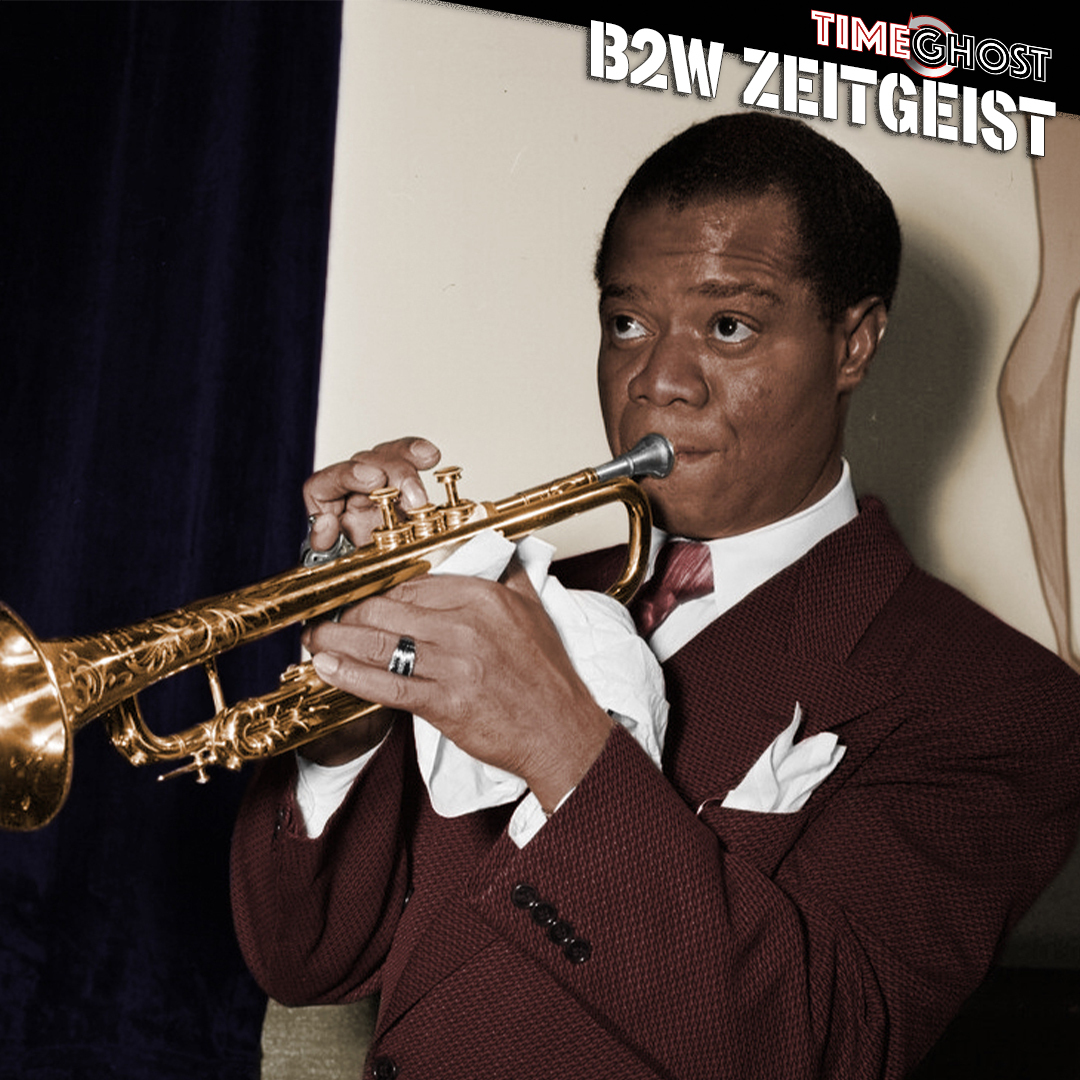 Next week on TimeGhost History, the second season of BETWEEN 2 WARS will begin. The season title is Zeitgeist, as this time around we try to capture more of the spirit of the interwar era. Leading up to that, we are dedicating our posts this week to a few people who embodied that Zeitgeist in a very public way.

Born in New Orleans in 1901, Louis had a wild childhood. Growing up in a poor, rough neighborhood known as ‘The Battlefield’, a sentence in a juvenile detention center after firing a gun, one job at a dance hall functioning as a mob front, and another as a pimp (solicitor) for a prostitute which ended sourly after she stabbed him in the shoulder. By then he was just fifteen.

Louis showed promise as a musician though, and after playing in bands in New Orleans, he moved to Chicago and then New York, where he really honed his skill on the trumpet, with the support of his wife Lil Hardin. They formed the ‘Hot Five’ band, which became the most popular jazz band in the US.

Now creatively free to develop his personal style, Armstrong tended to improvise lyrics live, sometimes breaking off into wholly improvised melodies. This new phenomenon, known as ‘Scat singing,’ infused jazz with personality, and moved it from a collective band effort to a soloist’s art. This jazz revolution, popular with both whites and blacks, transcended the traditional racial divisions in the US, making it one of the defining features of the inter-war period, particularly the Roaring ’20s.

Armstrong’s career epitomized the American success story, and even more so as a black man in a segregated society. He received a fair amount of criticism because he did not use his popularity and voice to intercede for anti-racism. However, his entertainment achievements indisputably helped to bridge the cultural gap in society in the ’20s and create a short-lived taste of hedonism before the darkness of the second world war.

It was Radio that propelled the world and Armstrong into the age of broadcast media, a phenomena politicians quickly seized on. Check out “Fake News in the Radio Age” on  BETWEEN 2 WARS S.01.
Watch it here: https://youtu.be/3FZc__g1V08